The M5 F90 is able to put down its power much better than its predecessor, so we gave it some more!

Very professional. Did my M5 F90 Ecu remap. Car is behaving really well. Other well known providers failed to remap but it was a piece of cake for them. 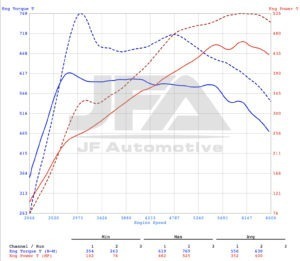 Since 1985 when it was first released, the M5 has been an iconic car for everyone; we remember having posters of these cars on our walls as teenagers, and yet we still love the car today! Until now, the M5 name has been associated with rear wheel drive, which struggles to provide enough grip to use the whole power band on most roads. The new F90 model goes against this trend, and rightly so. With BMW’s xDrive 4WD system, the M5 can now put down all 602BHP with ease. Alongside this, this model comes with many new features over its predecessor; new interior, body and most importantly, a revised engine.

Everybody knew from the minute this car was revealed that it was going to be a hit. Here’s a review of the car by ‘carmagazine’ if you want the ins and outs. For this reason, we knew from the get go that M5 F90 tuning was going to be something to develop and perfect. We put this car on the dyno for an entire day to make sure the map was perfect, making many tweaks along the way to get to the final result…

Being that BMW is a German car manufacturer, we knew straight away that the power and torque figures they released were going to be lower than they actually are. We run the M5 multiple times so that we had a solid graph to base out finding off. What we found was just as we suspected; Instead of 602BHP and 750Nm torque, this beast was actually running 642BHP and 857Nm torque! With over 100Nm torque above the factory figures before any tuning, we knew this 4.4L twin turbo would make big power already!

As we’ve discussed the car is already great. Being an M5, the ride is ultra smooth and quiet until you plant your right foot and go into hyper-speed! Once we had written the custom map to the car, we run the car on the dyno once again to find out exactly what gains the car received.

After many hours of dyno testing, data logging and map tweaking we arrived at a safe power figure of 525WHP (Wheel Power) and 769WNM (Wheel Torque) which equates to 730BHP and 1068Nm using 28% loss on for drivetrain and dyno. With that much torque, the car pulls a lot harder making for a much more spirited driving experience. After a road test and final road data log we clear any fault code that may have triggered from being on the dyno. We could really feel power increase which was nothing short of CRAZY: exactly what the M5 is all about. Our customer has since said he was very happy with the car now and that our stage 1 software is really night and day over the stock map.

If you’ve got an M5 F90 and would like to enquire about tuning, use the button below to find out how to get in contact.

Enquire About This Package

Can your car use this?

Enter your registration number below and let us tell you how we can improve performance and economy:

Or search by make and model